Heroes of the Forgotten Kingdoms

I have already shown my cover artwork for Heroes of the Fallen lands, and mentioned that it was one of a pair that made up the Player Essentials titles. I am happy that I can now share it's companion piece with you:


Heroes of the Forgotten Kingdoms. 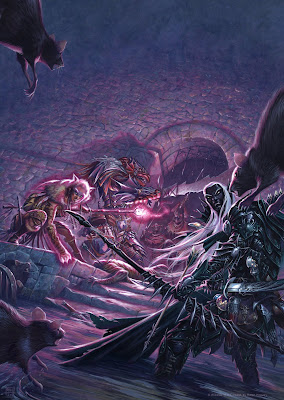 Acrylic, Approx 13" x 17". Original artwork for sale: £1700
This intentionally has a lot of similarities with it's partner; the strong central light source, a prominent foreground figure, and enemies attacking from the background and foreground. The differences are in the flipping of the foreground figures and that in one we are looking up some stairs, whilst we are peering downwards in the other.

A clear comparison, and my original value sketches, can be seen here: 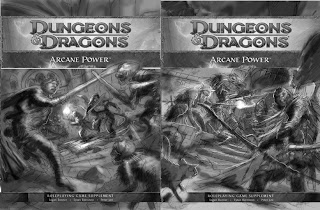 This was one of the rare occasions when I got to paint a Drow, and I was keen to make sure that his skin tone appeared black, rather than a shade of brown or purple. I had fun with him, and like the bold framing silhouette that his figure makes in this image.
This is the cover with trade dress added. Which helps explain the blank space at the top if the picture. 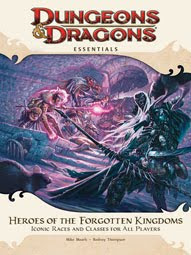 Full product details can be found here:
Player Essentials: Heroes of the Forgotten Kingdoms
Posted by Ralph Horsley at 16:45 2 comments:

Email ThisBlogThis!Share to TwitterShare to FacebookShare to Pinterest
Labels: Heroes of the Forgotten Kingdoms D and D Drow

Another cover of mine has just been announced. This time a further expansion for Talisman - The Highlands. 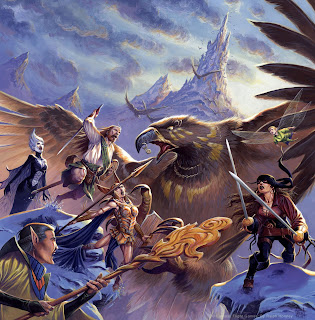 Acrylic, 11" x 11", Original Artwork SOLD.
I have had great fun working on a succession of covers for Talisman, the board game. They are uniquely challenging in that I am working to create a unified image that involves very different existing characters. This time around they are battling a giant eagle as they approach the aerie lair of the Eagle King - at least the vampire won't feel the cold! 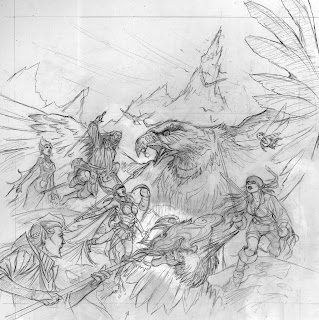 The Line Sketch.
The product details, and image with trade dress, can be found here:
Talisman the Highland product details.
Posted by Ralph Horsley at 11:45 9 comments: 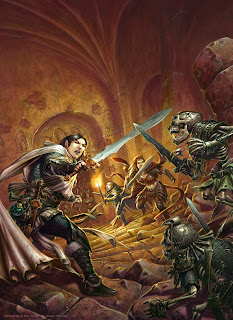 The Cropped Cover
I was very happy to be entrusted with a forthcoming pair of Dungeons & Dragons covers for the Player's Essentials titles. The First to be released will be Heroes of the Fallen Lands.
The painting shows the adventurers descending deeper into the depths of a dungeon, when they spot some Hobgoblin skeletons ahead, just as the Goblin skeletons attack from behind. 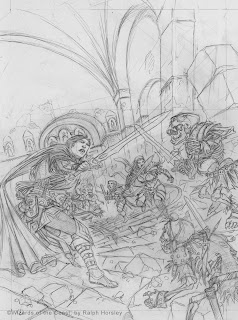 The Line Sketch
The dynamic tilted horizon line, and view down the stairs, help add drama to the image. It was  my first opportunity to work with the new set of iconics, and I also enjoyed getting to draw Goblin skeletons. 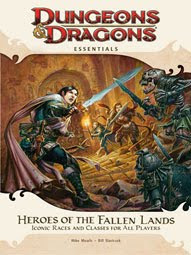 The Final Cover
It is interesting for me to see the final image set within it's trade dress, and the product details can be found here:
http://www.wizards.com/DnD/Product.aspx?x=dnd/products/dndacc/247520000 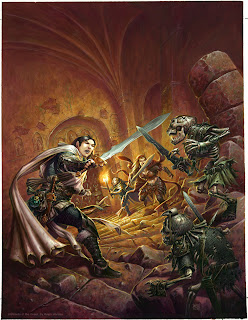 The Uncropped Original Painting.
21.5" x 16.5", Acrylic, For Sale: £ 1700
I always work with a lot of bleed, and it gives the graphic designer a lot more flexibility on their crop and placement.
Posted by Ralph Horsley at 21:39 4 comments: 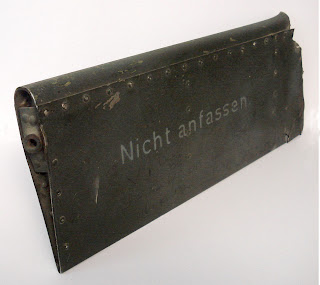 From an early age I have been interested in militaria. An interest that has now been focused into medieval arms & armour, and it's very near cousin, Fantasy. As a child an elderly neighbour became aware of my fascination and gave me a broken piece of metal.
Sadly at the time I didn't appreciate it's significance, and it was a over a decade later when I rediscovered the fragment in a box in my parent's attic, and read the pencil inscription:
V1 Doodlebug
Shot down by 2018 Squadron RAF
Aug 28 1944 at Rye S Robinson F/Lt. 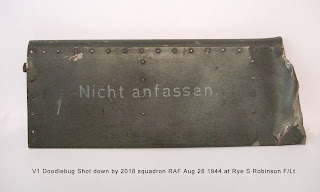 By then Mr Robinson had long since passed on, and I had missed the opportunity to ask him about the circumstances under which this doodlebug had been shot down. However it still felt very much like a link to a collective past. One in which my Father, as a child, had sat playing in his back garden in Heston, London, when a V1 demolished a house at the end of his street and sent a fragment of shrapnel flying past his head. 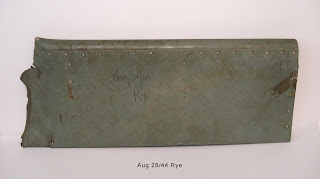 This piece of memorabilia has now sat on a shelf for many years, but recently I noticed the pencil had begun to fade, and I felt it was time I did something with it. As a consequence I have been in contact with a curator at the Imperial War Museum and have just donated this to their collection. I think it is much better that this is held in the national archives where it can be archived, and the connection to our past, and F/Lt Robinson's service, properly maintained and recognised. 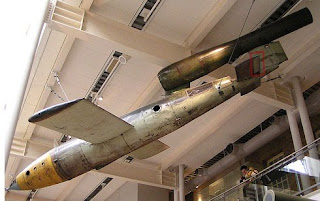 The above photo shows the V1 that is currently suspended from the ceiling of the Imperial War Museum, London, and I have highlighted in red the part of the missile I believe my fragment is. Oh, and I think Nicht Anfassen means Do Not Stand On.*
* Florian Stitz has provided the correct translation - Do Not Touch.
Next time it will be back to the art, and less of the influences.
Posted by Ralph Horsley at 14:50 6 comments:

I have just got back from a weekend break spent on the east coast of Yorkshire, England. We had the pleasure of staying in a very unusual building, an C18th Folly. 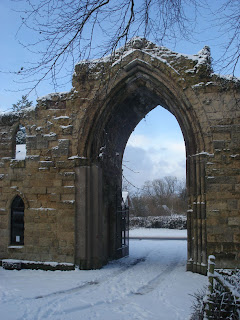 Built in 1825 it was always intended to resemble a tumbledown gatehouse, and had small lodges inset on either side of the gateway. These have now been converted to holiday lets, and it certainly made somewhere different to stay. 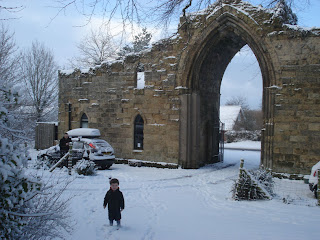 We were also treated to an unexpected snowfall (about 5-8 cms) overnight. Which did make visiting the local beaches even more bracing than usual, but also added to the overall sense of 'folly'. 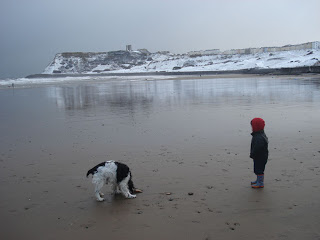 This is Scarborough, with ruined castle on headland. Just one of many beaches, Whitby, Filey, Bridlington and Hornsea amongst them, that we visited.
Posted by Ralph Horsley at 13:04 5 comments: