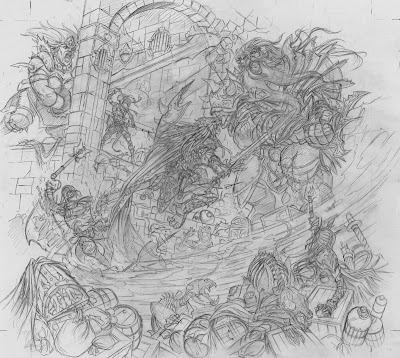 
I often get asked about the commission process that leads to the creation of a new painting. Wizards of the Coast has just published a new Dungeons & Dragons gaming supplement; Dungeon Master's Guide 2, in which I was asked to create an illustration of some Fire Giants, and that gives me the perfect opportunity to do so.

I had great fun painting this piece. I always relish working on multiple figures interacting and when you combine that with the dynamism of a fight scene I am revved up. The commission email will include administrative information and reference images, but when that was stripped away I was left with something like this:

This chapter start illo shows two to four PARAGON-LEVEL ADVENTURERS fighting TWO FIRE GIANTS,
a male and a female. Lying around are the FLAMING OR SMOLDERING CORPSES of dead HELL HOUNDS
that the adventurers have already killed (exact number left to the illustrator).
The illustrator can freely choose between the adventurers described below, showing all of them or
removing ones that don’t fit into the composition.
The scene unfolds in a fantastic DUNGEON HALL OR CHAMBER of some kind. The scale and
furnishings should be sized appropriately for fire giants. Behind the giants should be A PILE OF
TREASURE SPILLING OUT OF CHESTS that the giants have stolen, as well as BARRELS, CASKS,
bundled-up TAPESTRIES, and other things plundered from merchant caravans.
The point of this illo is to show the heroes fighting their way to the treasure!
ADVENTURERS
MALE HUMAN CLERIC in CHAINMAIL with a MACE and the holy symbol of MORADIN. He has NATIVE
AMERICAN facial features, tan skin, and dark hair.
FEMALE HALF-ELF WARLOCK in LEATHER ARMOR with a ROD. She points her rod at one of the giants,
firing a beam of crackling green energy.
MALE DRAGONBORN FIGHTER in SCALE ARMOR with a SHIELD and BASTARD SWORD charges toward a
fire giant.
FEMALE RAZORCLAW SHIFTER RANGER in HIDE ARMOR with a LONGBOW, shooting arrows at the
giants.
MONSTERS
The two FIRE GIANTS are husband and wife. Like all fire giants, they are broadly built and stand 12
feet tall. They can be equipped as the illustrator sees fit, but their “stuff” should look formidable and
wrought from iron. It would be great to give them some character, as befits a pair of “boss
monsters.” Both are INJURED, but don’t look like they’re on death’s door.
If the shifter ranger is included in the composition (see above), one of the giants can be shot with
ARROWS. 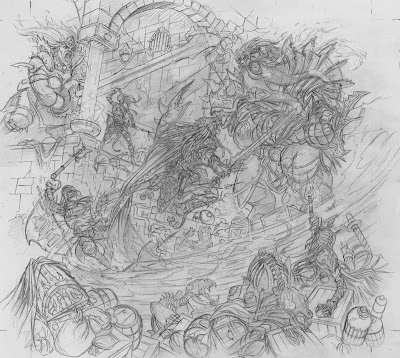 This was a complicated brief, with lots of characters and potential. I began by exploring different story ideas and compositional approaches through quick thumbnails thrown down in my sketch book. This is a way to explore ideas rapidly and familiarise myself with the commission details. Once I have nailed my approach I then draw up a line sketch in pencil on board.

The Chapter Start runs across a page and a half with the centre of the book coming about a third of the way in from the left. I tried to create an image where elements would flow across the guttering to tie the whole together but the left and right 'panels' could also contain their own narratives. The left third has at the top the female Giant charging in to strike the Shifter Ranger and at the bottom the Cleric being struck, whilst the right has the main action of the Dragonborn leaping over the arcing fiery sword to smite the male Giant.

The line sketch is then sent for approval by the Art Director. I was asked to look again at the pillar infront of the female Giant. It was felt to be hiding too much of the action. A good point but I liked having the column there to reinforce the perspective, whilst also giving the sense of their being another space up there to add depth and reinforce the charge into the chamber. A creative solution to keep the column was to change it into a lava fall. This was a lot slimmer which let us see more, reinforced the fire motif and did the other things I wanted it to. 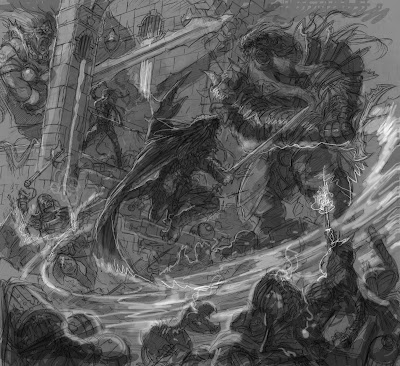 Alongside the first line sketch I also mocked up a quick digital value study. A line sketch without values can show all the detail, but isn't always the easiest to read. A value sketch helps both the Art Director and I see better what is envisaged. It is also common to be working on several projects concurrently and pinning this down whilst it is still fresh is always useful. I may also take this sketch further and add digital colour washes to explore different colour palettes, but I usually only finalise my colour choice when I get out the acrylics at the drawing board. 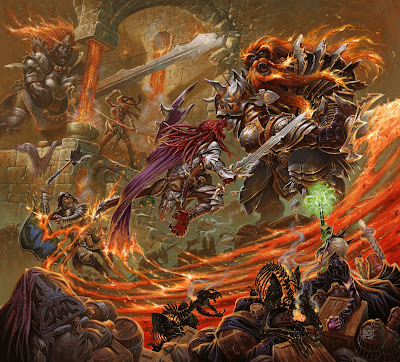 I paint in acrylics, usually working background to foreground and I often mask off the figures to allows for looser brushstrokes in the background. When scanned in I will make some digital tweaks, this is not just for colour correction, but to add some effects. In this instance the flame and magic was further saturated and some highlights strengthened.

This wasn't the first time I had the pleasure of working on Fire Giants and I will try and share them soon.
Posted by Ralph Horsley at 22:36