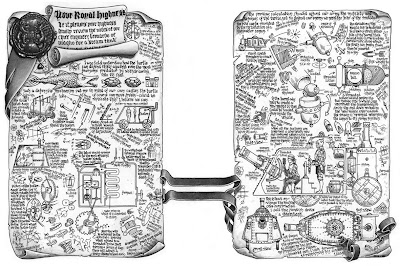 Imperial Steam Tank
Illustrated story from Inferno! magazine.
©Games Workshop
One of my longest standing clients is Games Workshop. In 1997 The Black Library had not been long spawned and one of it's first creations was Inferno! magazine - a mix of comic strips, short stories and illustrated features. My first commission with GW was for issue #1; an illustrated story collaboration with Jonathan Greene. He provided the words and I the detailed linework that accompanied them. We worked on a number of these pieces together before Jonathan concentrated on the straight prose of his novels, and I began to undertake the writing. 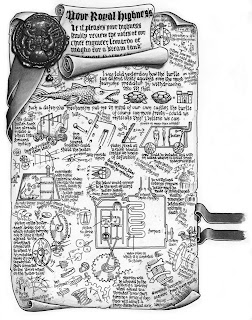 25 x 32 cm. Technical Pen, Ink, acrylic on Bristol Board.
We have just exchanged emails, and I was prompted to look through some of the back catalogue. The Imperial Steam Tank was one of my earliest solo projects, and also one of the shortest, but I enjoy it's nostalgia value, and it reveals my roots. 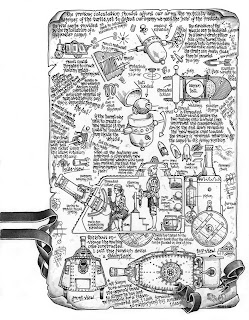 I was keen to incorporate the text into the illustration as much as possible. That wasn't always possible, but this was a prime example where I got to run riot. Looking back I appreciate how much freedom I had to create with these pieces. I proposed the idea, and was then left to run with it. 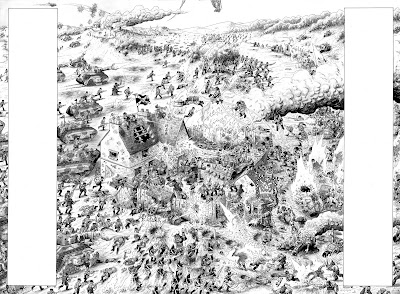 The Battle of Nis-Pazar.
48 x 36 cm. © Games Workshop
The subjects also allowed for a wide variety of approaches. The humorous pseuod-technicality of the Steam Tank would be followed by a 'where's Wally?' battle scene like Nis-Pazar or the Military History approach of 'preparing Steel Storm'. It was a great learning experience that I value even more fully now. 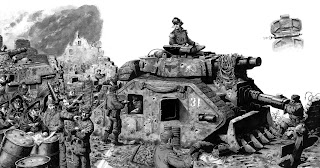 I am itching to share various artworks, but am having to wait until publication dates come along. Meantime I was sorting through my storage drawers, in response to a sales enquiry, and I stumbled upon the pencil sketch I made for a new address card when we moved about 3 years back. I thought it was a fun piece that having emerged from the bottom of a pile of paintings could step out into the world a little further. 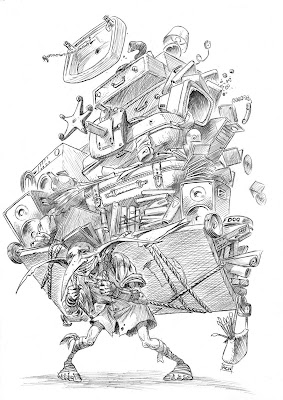 Email ThisBlogThis!Share to TwitterShare to FacebookShare to Pinterest
Labels: Imp

It has been a little while since I have had the pleasure of appearing on the Ninja Mountain podcast. The regular recording night clashes with my one regular gaming commitment, but last week we had a rather impromptu chat-whilst-we-work, that was organised by Jon Hodgson.

The result can be heard here:
NM podcast #56

and I think we covered an interesting range of work related topics.
Posted by Ralph Horsley at 12:25 No comments: