Temple of the Serpent 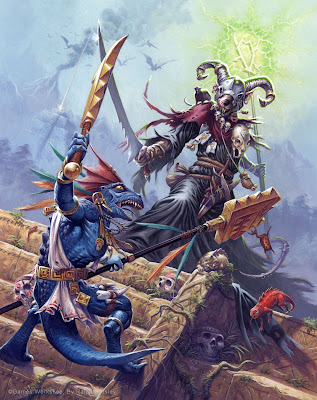 This is my latest novel cover for Games Workshop, and the second in the ongoing series about Thanquol (the Skaven Grey Seer).

I do like working with  a low viewpoint and tilted horizon plane, and this is no exception, but I also really concentrated on dropping the background back to let Thanquol's silhouette read nice and clearly.

I also threw in  a few extra details, which happily the editor, Darius Hinks, picked up on in his blog post:

which also shows the cover with it's full trade dress.

I have created cover illustrations for three different sets of DnD miniature's, one of which included a new Dragon design - the Iron Dragon. 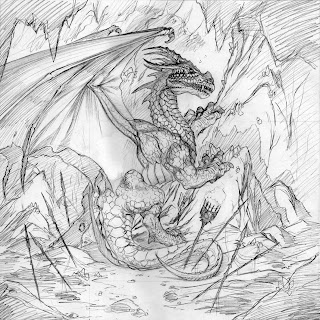 After brainstorming ideas through the creation of quick thumbnails the next step is to create a more fully realised sketch. The approach I adopted was designed to clearly show some of his distinguishing characteristics; his head and tail. 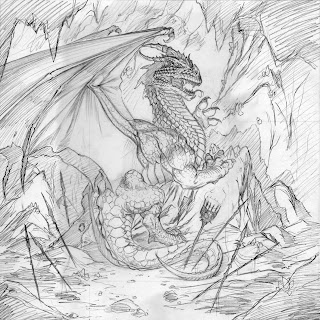 I had deliberately adopted a slightly different approach by showing him partly from behind. I liked the idea of conveying the sense of creeping up and surprising the beastie, but it was felt that more direct engagement was probably needed to really grab the viewer. 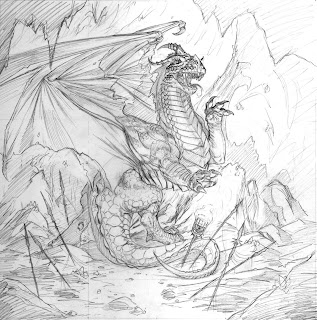 As you can see I first twisted the head (sketch #2), then more of the body (sketch #3), but by now the pose had become awkward and the orginal concept was trying too hard to be forced into a different direction. 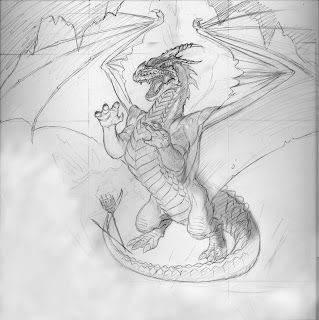 Instead I started from scratch. It was important that the image worked, and a cover is certainly not the sort of piece to settle for weak compromise on. However you can see in #4 that I have yet to fully realise the background as I wanted to make sure this was closer to the mark before polishing the image up too much. 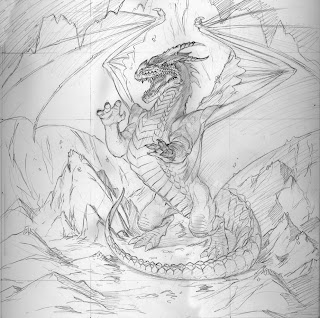 A minor tweak of a foreleg, full realisation of the background and we are good to go. It is unusual to have so many sketch revisions (if any at all) before going into the final painting, but when dealing with an important image I am happy to put all the effort in that is required for a strong piece. 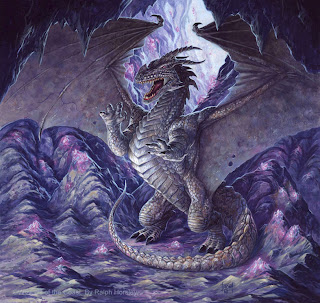 I think the final image worked well on the box cover, and the original painting has also found a good home in the hands of an art collector. Job done.

Around the same time that I got to work on Martial Power 2 I also had the great pleasure of working on the cover for The Slaying Stone.

It was interesting to portray a mechanised 'dog' and to try to give it some personality. It was also necessary for the pack leader of the Iron Defenders (for that is what they are) to stand out, which is why he got all the gilt trim.

I was also tackling a night time scene, which naturally inclines towards a blue/purple palette. To add interest I threw in the last remnants of a sunset, which helps delineate the horizon and lets the silhouette of the tower stand out more clearly. I also decided on a secondary foreground light source. I felt this indicated something impinging into the scene from 'out of shot' - the target of the 'dogs' attack - and allowed me to intoduce warmer colours in the foreground, which helps the lead figure pop.

For details of the supplement and to see the cover iwth full trade dress on please visit:-

One of the mild frustrations of working on commissions is the inability to show a finished painting until the publisher has released the image as part of their own promotions. Sometimes this can mean quite a time lag especially with cover artwork which is often commisisoned a long time in advance of publication.

Therefore I was very happy to see that Wizards have an image of my cover showing in their product listing alongside the entry for the Martial Power 2 DnD supplement, as it is not due for publication until 2010, but it means I can now share it with you.

Full details of the product, including the cover as it will appear in print, can be found here: http://www.wizards.com/DnD/Product.aspx?x=dnd/products/dndacc/251230000

I was pleasantly surprised to find out that Wizards of the Coast have collaborated with Jones Soda to produce a limited edition range of DnD themed drinks and that my Warforged Titan image was chosen for the Eldritch Blast label - that's the green drink on the right.

Unfortunately I don't think Jones Soda is imported to the UK, so I will probably never get my hands on one, but sweet it is nonetheless :)

Here are some more details:

http://www.myjones.com/code/limited.php?campaign=wizards#ordernow
Posted by Ralph Horsley at 13:07 No comments: 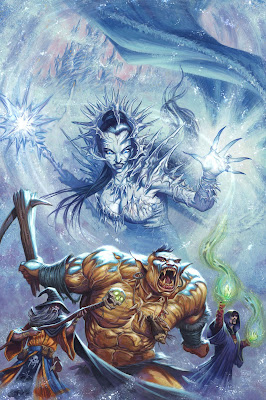 I am usually commissioned some time before the actual publication date and it is always hard to wait until then to show a new painting. Well just recently a lot of my pieces have appeared on various publisher's web sites and I am keen to share them with you over the next few days.

First up is the cover for the new Talisman expansion; Frostmarch. Details of which can be found here, alongside seeing this painting with the trade dress on: http://www.fantasyflightgames.com/edge_news.asp?eidn=774

It was interesting for me to present a collage effect, even if it borrowed it's composition from the previous Reaper expansion http://ralphhorsley.deviantart.com/art/Talisman-The-Reaper-101804778

The idea was for the strong rim light to visually tie in the foreground figures with the Ice Queen. Whilst I had fun with the loose swirls and snow effects on the latter which helped give movement and dynamics to the image.
Posted by Ralph Horsley at 12:30 4 comments: 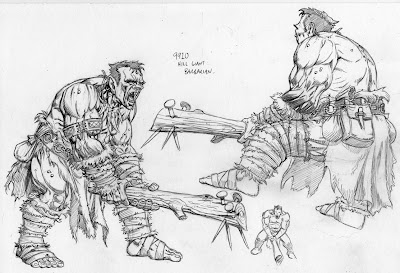 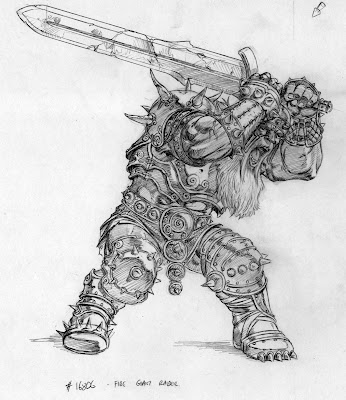 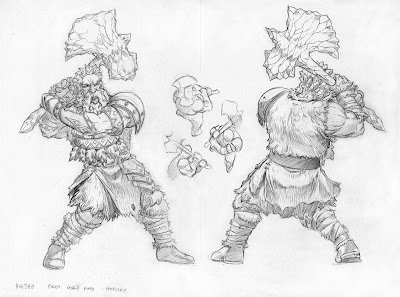 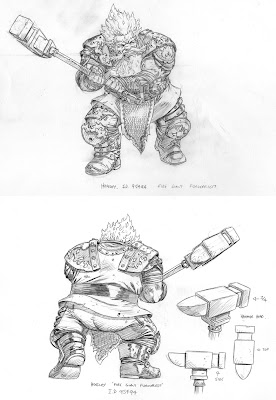 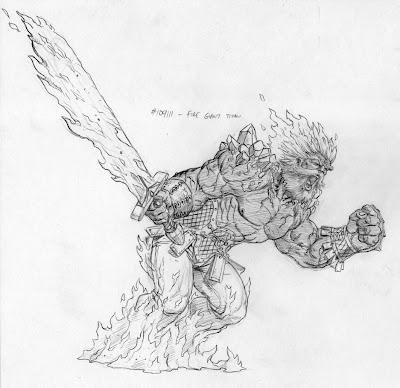 Oh, and it has been really nice to receive the complimentaruy copies of these. Seeing my sketches transformed into figurines has been great, and they proudly sit on a shelf next to my monitor :)
Posted by Ralph Horsley at 13:55 1 comment: