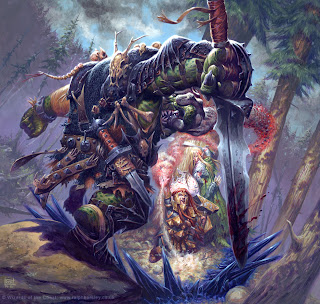 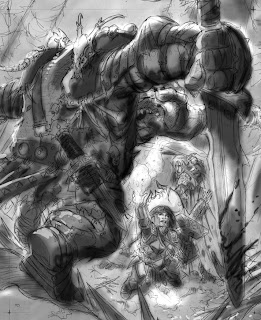 The cropped value study.
I decided to emphasise the cornered predicament of our heroes by using the Troll as the framing device, and also to elevate our point of view. Looking down upon someone helps make them appear more vulnerable. Whilst placing the Troll in the foreground like this gives him that imposing mass and big silhouette.
The Trolls body and sword provide a neat triangular window through which to see our protagonists. I combined this with stronger 'spot' lighting upon them to really make the beleagured heroes our focus. The white Elf shield also aids in letting the Dwarf head stand out clearly. Important as she is the source of the action with her spell going off.
The earth's grasp presented the biggest challenge. An illustration is a 'frozen moment', yet the spell required some clarification, and a sense of movement. The Dwarf seizes a handful of dirt, throws it into the air, where it transforms into a grasping stone hand that grabs, and starts to crush, the Troll's face. The trailing dust cloud allowed me to cover both those bases. Plus the swirling 's-shape' is given energy by breaking the frame set up by the Troll, and is further emphasised by the contrasting, saturated, red of it's magical effect.
Initially this might give the impression of a final stand, but really it is just the start of the Fightback!
Posted by Ralph Horsley at 11:21