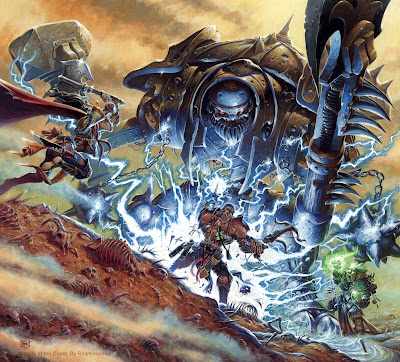 The Eberron Campaign guide was recently released by Wizards of the Coast; - info here:
http://www.wizards.com/default.asp?x=products/dndacc/239647200

I had the above chapter start illustration in there, a Warforged Titan battling some adventurers. I have had the chance to work on a few of these now and I have always found them very satisfying. The large format allows you to go a bit wilder than some smaller interior illustrations might.

The one drawback is the layout restrictions. The image spread across a page and a half, which means that quite a lot of the image is sucked into the gutter about a third of the way in from the left. I try to create a composition that works as whole but also with the right two thirds and the left third standing alone.

In this instance you have the female shifter on the left. She fills that left third nicely, but also acts to draw the viewer back into the focus of the composition, which is the lightning blast and warforged adventurer.
Posted by Ralph Horsley at 12:23