Having created a line sketch, then painted it up to it's 'Final', I was keen to receive feedback on the completed cover painting. 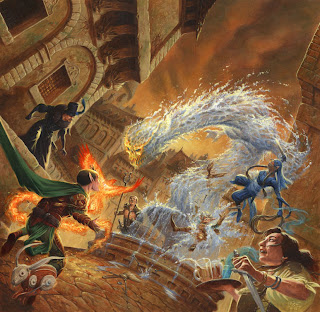 I got a positive response and a request for minor tweaks - lose the mechanical Owl and add mass to the Elementals neck and shoulders. I could have made these changes in acrylics, but it would have been hard to maintain some of the qualities in the water, esepcially the colour showing through from the background. Instead I opted for a digital approach, this meant mainly resizing, rather than repainting. I also favour a lot of 'cloning' within Photoshop, rather than direct painting, as this helps retain as much of the originals marks and textures as possible, otherwise the paintover can stand out too readily against the traditional media. 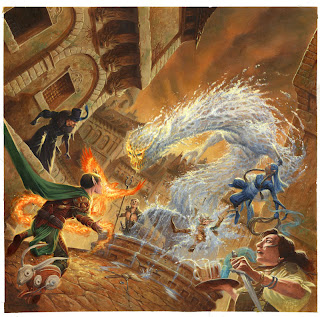 This now met with approval, and an invoice was duly dispatched.
However little did I know that The City was yet to be completed. A few weeks later, as the game was being laid out for print, a fresh set of design decisions was made. It was decided that the setting should be night time, and that the Houri should be dropped from the Elementals grasp, and take up position on the left instead.
Again Photoshop proved it's worth. I used a mix of overlays and adjustments to trasnform the image. I reversed the palette so that blue became dominant and orange the accent. 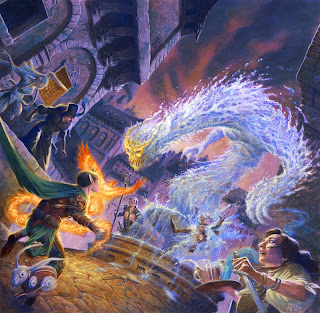 I had tinted the Elemental to bring it in line with his surroundings, but it was felt he was getting lost, so I upped the warm colours more and integrated him back into the light. The City was now finally built and is available here. 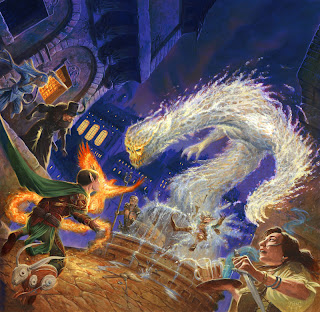