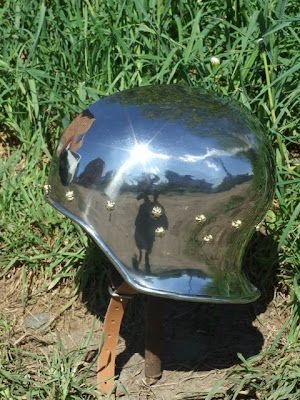 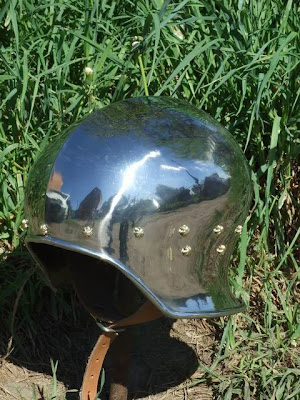 I have been away for the best part of the last fortnight indulging two of my great passions; gaming and music.
Firstly I was playing in a live role playing game. This system is written and run by some friends of mine, and is held over a weekend on a Scout camp site. The site is nicely hilly, with lots of small streams, and extensive tree cover. All of which helps with the atmosphere and immersion in the game.
We are always looking for new players and details can be found here:
http://www.bladelands.co.uk/home/index.php
Whilst these games are easily derided (and I have myself done so in the past), I find that participation in them helps feed back into my artwork. This works in a number of ways; being involved in fantasy games, and working on fantasy games products, clearly has a close correlation for sparking ideas, my imagination, and an understanding of other players concerns and interests - what people consider 'cool' I suppose.
However the most useful aspect has been observing kit and costuming in action. Despite drawing/painting chainmail for years I had rarely seen it worn 'in the flesh' until I started LRP. Seeing players running around in this, along with the wearing of plate armour, robes, and the miscellanea of adventuring (pouches, scabbards, bags, etc) has really boosted my understanding of how to represent these in my artwork, oh, and showed up my own previous erroneous interpretations, For instance chainmail is heavy and 'slinky' it doesn't crease and fold the way fabrics do at all, but has its own distinctive dynamic.
I have also found the costuming/kit aspect to be enjoyable in it's own right, besides also giving me a very good excuse (as if one were needed) to acquire my own armour and other very useful pieces for reference. The pictures at the top of this article are of my latest purchase; a custom made open sallet, which I think is gorgeous on so many levels, and now has pride of place next to my drawing board. It was made by Maxim Suprovich of wildarmoury:
http://wildarmoury.com/
The second passion, music, I indulged this last weekend. For me one of the huge benefits of working from home is the ability to listen to music all day whilst working. It is something which I feel enhances my quality of life no end, and it was certainly enhanced this last weekend when I attended the Glastonbury festival.
http://www.glastonburyfestivals.co.uk/
It is, allegedly, the largest music and performing arts festival in the world. 180,000 people gathered in fields near to the legendary Glastonbury Tor http://www.glastonburytor.org.uk/ (supposedly the site of Avalon, and visible from the festival) for five days of hugely enjoyable entertainment. It has an 8-mile perimeter and a plethora of stages. I am now exhausted, but recharged, happy to be home, and looking forwrad to getting back to painting :)
Posted by Ralph Horsley at 14:49